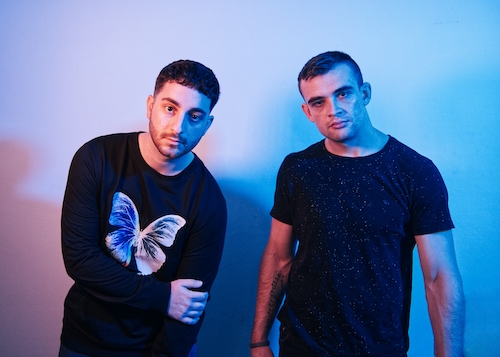 Alternative-rap duo Mod10 are back with a powerful new anthem ‘Blank Canvas’. Constantly evolving with each release, the iconic two-piece combine sounds of rap, hip-hop, trap and pop to create their signature sound. Exploring themes of self discovery, social situations and larger mysteries about humans and the universe, Mod10 are as real as it gets. Consisting of Matt Kohn on lyrics and vocals, and Sam Carlen on production, the sensational rap track flows freely with confidence and individuality. Receiving attention via the streaming world, the duo have over 90,000 streams on Spotify alone across three previous singles.

I have been playing guitar and surrounding myself with music since I’ve been 7 years old or so. My college years got me to expand my musical taste to many other sounds that aren’t “guitar music.” Now I love to listen to all kinds of genres and incorporate those influences into the music I produce and write. When I heard Matt’s rapping and learned how open minded to other music he was, I just knew I had to make music with him, and we could utilize each other’s talents. – Sam

Mod10’s writing process varies, but it typically starts with verse ideas or a general melodic/rhythmic idea. By the time I have a basic 4 bar loop made in Logic, Matt will have 4-8 lines of a verse done. The song will keep expanding in length until we start coming up with new sections like choruses or bridges, or even individual lines within a verse that could be its own section. We love to keep a song dynamic and ever changing, opting to never truly repeat a part the same way twice. Once we have a structure made with rough demo recordings, we’ll go through and re-track most vocals, find new samples and “sound design”, some ear candy and additional parts to take the production to the next level. We go into the mixing process and then from there we send it off to master with Ryan Schwabe
who makes us sound loud and crisp, ready to hopefully compete with all the other great-sounding music out there! – Sam

Matt and I met through a mutual friend named Jasper. I was filming a live music video for Jasper’s original song “Inertia” and Matt featured on a section in the video. We started making some other verses here and there and eventually came up with some of the tracks you hear on the album now!

Matt opened for Token and helped sell out the show at Voltage Lounge in Philly in 2019. Sam played with his old band, Andorra, at the Radio 104.5 Birthday show over at BB&amp;T Pavillion, opening for some of the biggest alternative/rock artists at the time back in 2015.

Matt is an experienced table tennis player and Sam has been doing Brazilian Jiu Jitsu for over 3 years now.

Stay true to yourself.

We both love twenty-one pilots and think they have some of the best pop music out there. It would be a dream to collaborate or open a show for them in the future.

I started writing a lot of these tracks with the intention of figuring out my path in life. I utilized the music we were creating to ultimately transform fears and doubts into confidence in myself. I imagined that others who were striving to better themselves may also be going through similar circumstances and experiences. To start, I dive deeper into an idea and expand on different thoughts or limited beliefs I have about it. We wanted the sections to evolve with an underlying goal that as the songs expanded further, so would my grasp on figuring out ways of overcoming those challenges. For me it was important to face things because the only way out, is through them. I also found that discomfort can liberate us if we hold it from a place of equanimity. That’s why we incorporate themes of presence and mindfulness throughout the EP. – Matt