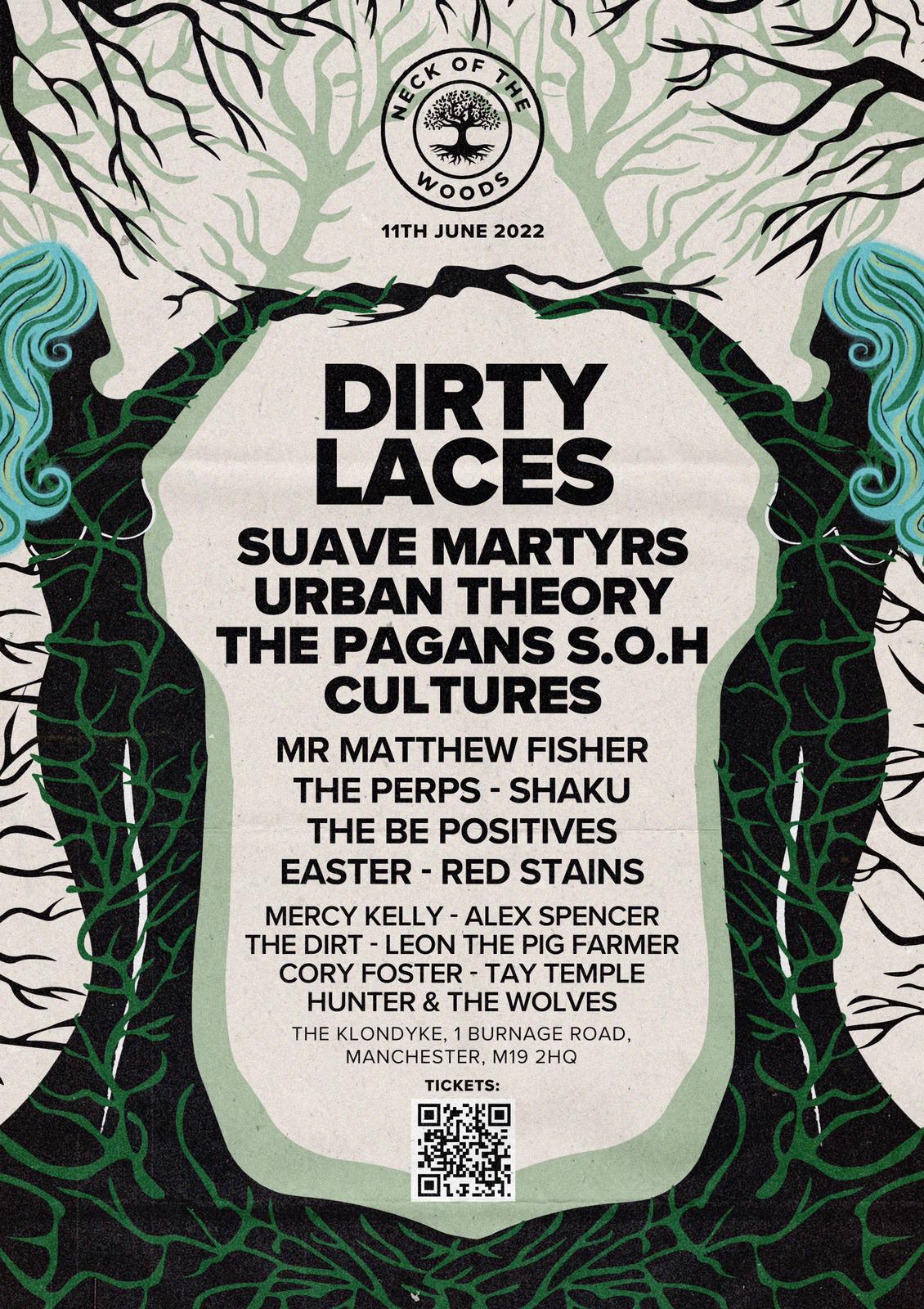 Spring has sprung and festival season is just round the corner, here’ a new kid on the fest block Neck of the Woods, Taking place June 11th,  in the suburbs at Levenshulme’s Klondyke Club.

Dirty Laces are the festival headliners, the Manchester rockers set to come and blow away their hometown. Other local favourites Suave Martyrs, Urban Theory and Red Stains also make up some of the stellar lineup. Joining the debut festival  line up from further afield are The Pagans S.O.H. and Shaku.
ADVERTISERS

Brought to you by indie rising stars Suave Martyrs and promoters We Are Manchester aka WAM. Having been around for over 10 years, WAM began curating successful livestreams during lockdown alongside Inspiral Carpets and Radio DJ legend, Clint Boon. The livestreams featured bands such as The Battery Farm, John Robb (interview), Five Days North, Jade Assembly, Saints Among Us, Tay Temple, Jess Kemp and many more.

Once restrictions lifted in May 2021, We Are Manchester held the first of their monthly live events at Aatma.
Sam Brunt from Suave Martyrs had this to say about the fest: “We are absolutely buzzing to be able to announce all of these brilliant bands. We are staggered by the response already and can’t wait until June to open our doors.”

We caught up with the team to find out a bit more…..
What was the ethos behind the festival?
We are passionate about grassroots music and we wanted to showcase the best of the northern music scene. We wanted to put on a big event that built on what We Are Manchester and Sm Presents had already achieved in their live events. A full day event across three stages we thought would be able to really show what Manchester has to offer.
Who is it aimed at?
Everyone! We want this to be accessible to everyone and will feature bands across different genres. The festival itself is open to all, with under 14’s needing adult supervision.
What’s makes this festival different?
What makes this festival different is that it is grassroots in every sense. We are a independent promoters, with independent bands, artists in a community venue. As a result, we aren’t hamstrung by the same constraints of other festivals we are able to put on bands with a unique feel who you won’t be able to see anywhere else.
What about the location and how do we get there?
The Klondyke is a community venue where we will be putting on stages both inside and outside with stalls, bars and food. It is only a ten minute train journey from Manchester Piccadilly and a five minute walk from Levenshulme train station
Do we need wellies or a tent?
No tents needed as this is a one day event. However, keep your eyes peeled for an after party.
Tell us about the headliners?
We’re very pleased to have Dirty Laces headlining for us! They are a MCR rock and roll 5 piece, raw guitar music & powerful live show with a huge stage presence. They have been stalwarts of the Manchester scene for a number of years and we couldn’t be happier to have them in one of their first Manchester shows since lockdown.
What new bands do we need to make sure we don’t miss?
We have some fantastic bands that have been established on the Manchester scene for some time such as Suave Martyrs, Cultures and The Red Stains, as well as some great up and comers earlier in the day such as Man & Boy and Hunter and the Wolves.  We also have a number of exciting bands from further afield such as Birmingham’s Pagans SOH and Leeds’ Shaku.
What are we eating and drinking?
The venue itself will be providing food with plans for wood fired pizza and other tasty treats. We will also have plenty of stalls, including art, vinyl and the usual festival fare.
Any else we need to know? Fancy dress?
We don’t have a theme for fancy dress this year currently, though we certainly encourage anyone who would like to dress up to do so. In fact, if anyone would like to suggest some themes for fancy dress the best one can have a free ticket!
What’s the Ticket links?
www.fatsoma.com/e/e0zmzw36/neck-of-the-woods-festival