Hello Cosmos hurtle towards Earth with an epic clash collision of post-punk, indie-disco and alternative rock with a stunning 80s inspired video!

Put together and led by songwriter and bass player Ben Robinson, co-founder of Kendal Calling & Bluedot Festival Hello Cosmos is made up of a cast of collaborators that Ben has met over the years with over 20 performers over 3 years including his brother Simon on drums.

Northern Revive quizzed Robinson about the latest release and what’s next for eclectic and electric Hello Cosmos.

Talk us through “Let Love Be”?

Robinson: It was originally recorded as a series of loops and random one-liners I’d been writing while on my honeymoon.

I sent the batch of loops to Joe Thompson and he created a track from them with an epic sense of groove.

I then headed back into Greenmount where we added more elements including the final piece of vocal.

The harmonies added so much and the wailing ‘can you feel it’ finished the track. We then sent it back over to Joe for him to do a remix and the results are this track.

We’ve put is out on Valentine’s day as it all started from a realisation that if you have love as your foundation in a relationship and everything comes from there the rest will fall into place. 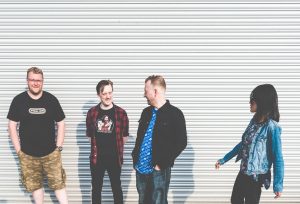 Robinson: My parents love for music. Before I knew what music was I knew all the words to The Beatles & Queens back catalogue thanks to my Dad’s tapes being played in the car everywhere we went.

The spirit of Motown bounced around our house while my Mum sang along while at home too.

Robinson: On one level having something to say, something to get out of my system. On another the pure intoxicating passion that comes through a love of music and the aching to dive deeper into it. I’ll always be a fan of music first, everything else I do comes from that place of passion.

Robinson: In my early years my older brother Simon (Hello Cosmos drummer and co-creator) as he trained me on the joys of Grunge, Zepplin, Floyd and opened the door to the rabbit hole of alternative music.

What has been the biggest challenge you have faced in your career so far?

Robinson: Overcoming my own doubts about the validity of the music we make and the imposter syndrome I feel about my own abilities. Breaking that wall of fear and putting yourself out there is one of the hardest challenges an artist’s faces. It’s also one that comes back around with pressures of following up on success and performing to new audiences.

What has been the nicest thing ever written about you?

Robinson: Bittersweet comment this one but both complementary and hilarious! “If Run for President is the aural equivalent of being waved at by the hand of God, next track The Cosmic Trigger is like having treacle covered cat shit poked in your ears”

What has been the best and worst gig you’ve ever played?

Robinson: The worst would be the one gig we tried to do as a three-piece without Angela when she was on the Placebo tour.

It was a charity fundraiser for John Drummond trust and our first show back home to all our friends. We tried to put all Angela’s parts into a trigger pad but it just didn’t work!

Our best show was blue dot last summer. We got to roll out our full visuals on a massive screen behind us, wore some quirky Apollo mission boiler suits and had a capacity tent going wild for the show right through.

It’s set the bar for our shows now, electric energy in that tent, just like you dream of when you pick up an instrument and first turn up the amp to LOUD.

What is the last album you played on Spotify?

Robinson: Bob Dylan – Bringing it all back home. I’ve been delving into his catalogue since watching him in NYC at thanksgiving. Still an excellent performer and although he’s been a big inspiration lyrically from day one there is a lot of his career I’ve not tuned into. He’s my go-to for the winter now!

If you could support any band who would it be and why?

Robinson: Rage Against the Machine. They are quite simply the best band I have watched live for power and crowd reaction… plus they are just back on the road so a good time to let them know this in the press.

Robinson: Henge, quite simply from another planet. A granfalloon Just released an amazing debut album. Lines are incredible too, they perfumed as a special guest at our last EP launch and I cant wait to see them again. Ultimate Spinach, 70’s band that I’ve just discovered, massively overlooked.

Give us a few hints on what’s in store next for Hello Cosmos?

Robinson: We’ve just recorded an EP in Florida while I and my brother Simon our drummer were on holiday there. That finishes 12 months that’s seen us record in Uganda, Manchester, Los Angeles, New York, Leeds & Florida.

In a nutshell who knows where we will be but you can bank on us continuing to release lots of music. In our first 18 months, we’ve put out over 23 tracks, 7 singles and 9 videos… and we’ve so much more sitting ready to go!