The Roster are a 5 piece indie band from Derby that releasing their new EP June 1st featuring tracks  ‘Made Of Lead’, ‘Not The Same’ and ‘Sewn’.

Northern Revive: Hello from Northern Revive! So as its lock down we can’t interview you face to face, and we can’t come see your gig, but we can still introduce you to our readers so lets start with what made you want to get into music?

The Roster: We all got into music at different times in our life, from our parent’s having mid life crisis’ and buying instruments to generations of musicians in families passing down their passion for music. Plus, some of us are useless at everything else.

TR: So, the first step when we’re writing a new tune is creating a chord progression and melody. Then we add bass and drums accordingly along with the accompanying guitar. After this, Joe writes the lyrics and we fine tune any extra bits that we think would add to the song. On some occasions though, Joe composes songs on acoustic with lyrics which we then transform into a band tune.

TR: It’s difficult to write lyrics without a track – usually a musical idea comes first and then the lyrics are based off this. 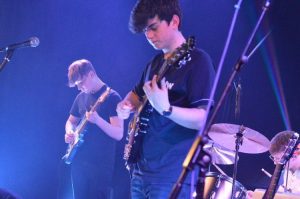 TR: We all went to school together, but we didn’t start the band until we were all in sixth form. We’re lucky that we all come from the same friends group.

TR: Probably would have to be when we played The Venue in Derby, one of the best crowds we’ve ever had, and after such a short time being together we could have never imagined playing to a crowd like that.

TR: We’d definitely love to collaborate with Loyle Carner. We love his music and reckon his sound could easily complement our music.

TR: With gig’s out the window, bands are having to find new ways to entertain their fans and stay active on social media, which has given birth to a new way of performing live music.

TR: Derby is a scene that struggles for venues and opportunities. Bands from our area have to look for gigs in Nottingham, Birmingham, Sheffield and other areas which have more active scenes.

You can find our music on any major streaming platforms like, Spotify, Apple Music, SoundCloud etc and keep informed via our social media.