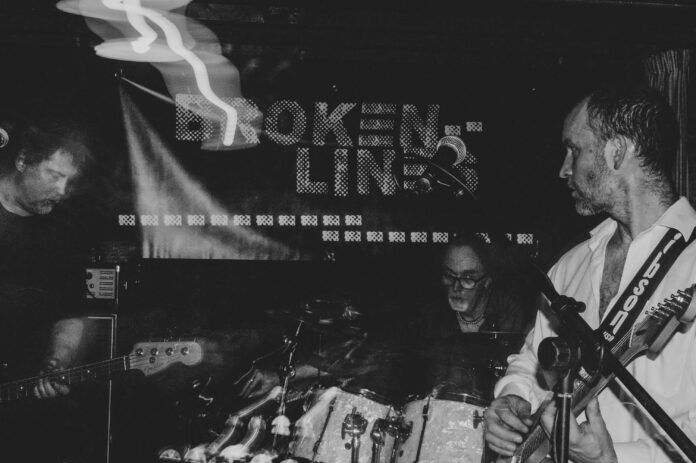 Though 2020 was a year that most of us would rather forget, it’s also been a year that has highlighted more than ever the widening class divide within the UK, and the disdainful ‘one rule for us’ mentality harboured by those in power. And while there are plenty of people who are quite happy to be spoon fed shit and smile, there’s an equal number who refuse to swallow it.

Broken Lines fall into the latter category. A three-piece from Pembrokeshire who harbour as much piss and vinegar as they do snarling punk spirit, their sound is impossible to pigeon-hole, let alone cage, fusing together elements of post-punk, psych, and classic rock to form a triumvirate of uncompromising alternative rock.

The band’s latest single ‘Out of Control’ is equal parts desperate plea and rallying cry. Three minutes of unhinged post-punk that clatters and careers towards its conclusion, it seeks both recognition and understanding while highlighting the unsustainability manifest in current global power constructs.

“It’s about how the rules and regulations that we live by are so misguided and based around profit and power” the band explain “How the media has become an intrinsic part of society and how its used to distract the masses. How the decision makers are so disconnected from the very planet that gives them life. How disconnected we are as a species, and how all this is creating a world that is out of control – famine, deforestation, factory farming, racism, weapons, wars, social divide, nuclear disasters and pandemics…”

It’s a heavy subject matter, and as such is something that lends itself perfectly to the feelings of paranoia and claustrophobia that are so evident across the track’s production and rumbling Stranglers-esque bassline.

Unhinged and uncompromising, ‘Out of Control’ is the sound of a band backed into a corner and trying desperately not to bite.