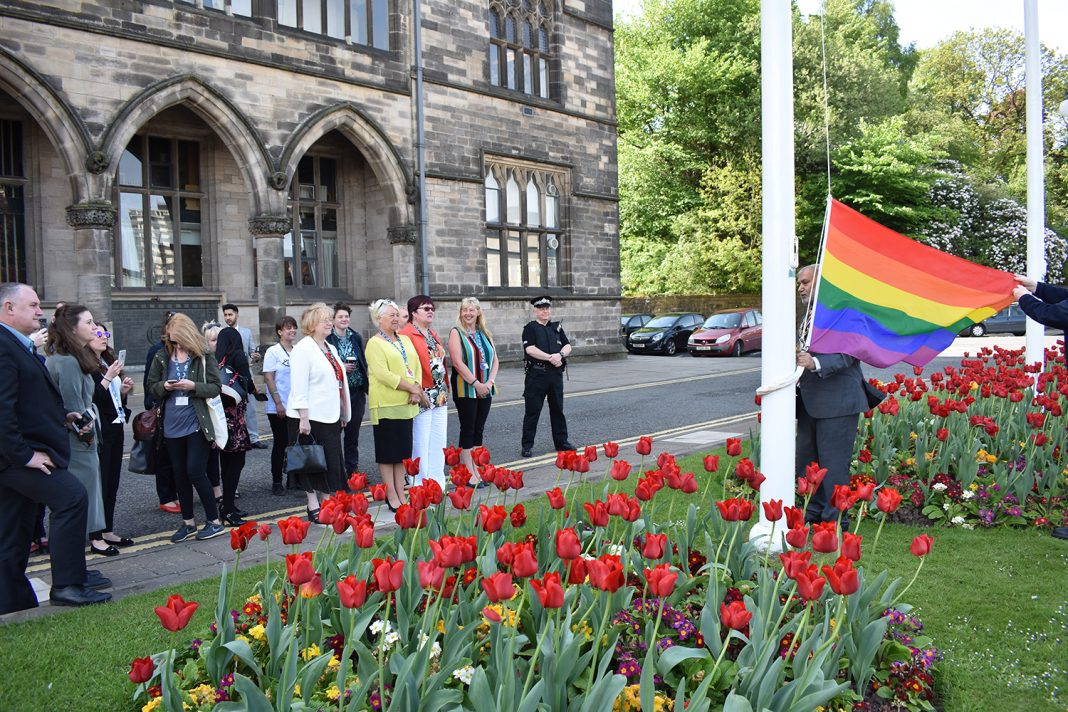 Residents of the borough of Rochdale came together to celebrate international day against homophobia, transphobia and biphobia (IDAHOBIT).

The rainbow flag was raised at the town hall by the mayor to mark the day, which is celebrated on May 17 each year.

Afterwards, everyone was invited to Hopwood Hall College to learn more about the challenges and opportunities for diversity and equality in Rochdale.

The council’s community safety team also attended to educate people about hate crime and the impact it has on the community.

“Rochdale is such a diverse borough, and it’s great to see so many members of the community come together to celebrate equality.

“Thank you to everyone who contributed to such an inclusive and informative event, which showed that people in Rochdale are committed to embracing diversity.”

“I’m glad that we live in a town where everyone from the mayor to my tutors can back this message and show it publically. Our Hopwood Pride group have been proud to be a part of this awareness campaign.”

IDAHOBIT is the most significant global event for sexual and gender diversity with over 1,000 events taking place in more than 120 countries worldwide.

The day draws attention to the discrimination experienced by LGBT+ people internationally, as 70 percent of the world’s population live under laws and regulations that limit freedom of expression around sexual orientation and gender identity.

“IDAHOBIT has been a brilliant opportunity to encourage a more inclusive environment for our students and staff. The day has helped bring a lot of attention to the promotion of inclusivity and notes it is a topic Rochdale genuinely cares about.

“The young people I speak to inspire and surprise me every day, we should all be very proud of this generation who are standing up to discrimination and showing the world that they won’t tolerate any form of discrimination.

“There is still a lot of work to be done around the world, but every day the students at Hopwood Hall College make me proud.”

For more information about this story contact Rochdale Borough Council’s media team on 01706 926002 or newsdesk@rochdale.gov.uk

Try our Delicious Recipe Today – Serve up a Taste of Summer with these Harissa Pork Chops.