Combining brand new track TIME IS RIGHT –  just the uplifting tonic the indie kids need at this time, a positive call to action and an eclectic swirl of melodic guitar riffs, with the raucous and driving grooves of BE MY SAVIOUR

Northern Revive took the chance to have a socially distanced chat with Stu Whiston to find out a bit more….

Northern Revive: What made you want to get into music?

SW: Listening to Definitely Maybe was the spark to pick up a guitar. When I was a kid I remember hearing U2- Pride on the radio in my Dad’s car and being transfixed with the sound of it. Melodies is something I’ve always been fascinated with way before I could play and instrument or sing. 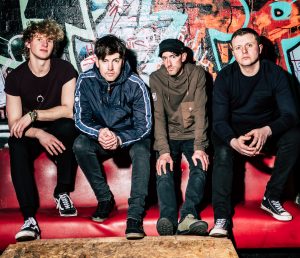 : What come first lyrics or music?

SW: Music.  I work from the chords and melody to then finding the words. For the track ‘Be My Saviour’ the lyric “Looking for some soul falling to my feet. Like a shopping trolley on a pebble beach.” Literally came to me as I was playing through the chords one day. The imagery of that set me up for the rest of the song which became about people’s perception of themselves and each other on social media and the desperation I can see within that hence ‘Be My Saviour’.

SW: Mike (Lead Guitar) and myself met at Music College and struck up a friendship through a mutual love of Oasis and Oasis bootlegs. He borrowed me about 10 different Oasis bootleg CD’s I’d never heard and that was it. Darren (Bass) is my brother’s best friend and I caught him in my bedroom one day playing this shitty bass I had for demoing with. I grabbed my guitar and we started jamming Aneurism by Nirvana. Us three have been in a covers band and various original bands over the years. Shader began around a demo I’d done of a song called ‘Broken Minds’ that Mike heard and loved. We got Darren involved on Bass and booked the rehearsal room for 3 months rehearsing that song and a few others. We asked Tom (Drums) to join the band after we’d seen a drum-cover video he’d filmed playing a Catfish and the Bottlemen very very well.

SW: Kendal Calling was great. The weather was mega and everyone was up for it. We also temporarily lost Darren’s bass that ended up falling off the buggy after our set (nobody noticed) so we spent 2 hours gutted until someone phoned me from security saying they’d found it. Party on!

SW: Tom can nail a tube of pringles in about 8 minutes so we’d need 10 tubes of them. Rest of us probably a couple of chilled beers. Darren has the more acquired taste in alcoholic beverages so f*ck knows what he’d ask for. I’d want plenty of water too.

NR: What other talents do you have? (kazop playing, champion toast burner…._

SW: Tom can run and do a forward flip and land on his feet like it ain’t no thing. Watch the video to our track ‘Be My Saviour’ for proof.

SW: Listen to everyone and listen to no one.