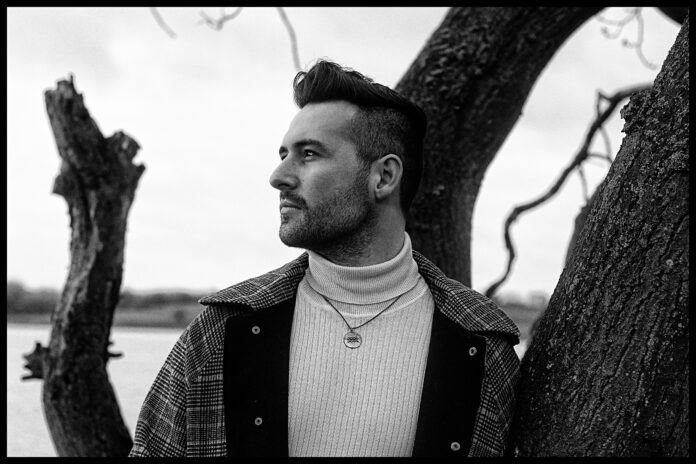 Singer-songwriter, producer and multi-instrumentalist GRAY pulls at the heartstrings in the poetic new offering ‘Blue In Her Bones’. Taken from his forthcoming debut album, released the same day, ‘In The Absence of Colour’ showcases a powerful artist with layers of character. GRAY won an honourable mention in the International Songwriting Competition with his debut single, ‘Something Warmer’, competing against the last (predominantly signed) 1% of 26,000 entrants. Receiving praise from BBC Introducing in Suffolk, GRAY’s previous single ‘Another Life’ was championed as ‘Track of the Week’ back in March. At the time of writing, the singles released from his forthcoming album have reached over 300,000 streams, and 7,000 personal Spotify playlists.

I’ve never really known anything else. Mum said I was humming kids TV themes and rocking back and forth before I could speak! It’s always felt like an extension of existing.

Usually, lyrics first – as when words and their emotional impact dictate where the harmony and melodic contour is going, I think there is more purpose and guts behind them. It tends to give the song a stronger identity, in my experience. When lyrics are an afterthought to a catchy melody; that can be the recipe for a generic, throwaway tune. But there is no right way, each to their own.

It’s the opposite for me. I looooove the studio; a place where, in the silence, all of the elements that make a track come together like an electric jigsaw puzzle. Then I’ve just got to find the best way to amplify that on a more minimal scale live. Recreations of the studio versions would often require about 12 musicians on stage!

My ex-band played the Saturday Big Top at the last Isle Of Wight festival in 2019. We’d won a huge national competition, and it was the best weekend ever!

Piano for meditation playlist. Case and point, listening to it now as focus music for these questions!

Like Hollywood (which has been far less original and is a little stale now, in my opinion), I would have a budget set aside by every label etc for more risk-taking ventures on acts. It is far too risk averse now and so we end up missing some truly inventive, creative and genre-defying genius from unknowns. Also, the top 40 would be more akin to 2013-15 with regard to a mix of generic hook-pop and more variety genres (soul/r&b/EDM/indie rock etc). We have very few defining acts (superstars of the era) as of late, most are pulled from the 00’s and early 10’s still, because so much of todays mainline industry seems based around a quick risk-averse, engineered cash grab. Bleurgh.

I’d love to sit in on sessions with Brian Eno, or Rick Rubin. Cliche I know, but those guys think very differently in a production role. They’re borderline philosophers in their wisdom!

Try not to see things in black and white. The best and only thing we as humans can really know, is that we know very little and should be a little less sure about things. We like simplicity, but life is infinitely complex – don’t reduce complex things to simplicities just because it makes you more comfortable, just accept you may not have the answer. Most people are trying their best with what they have. Also, you can learn the core of almost any skill set in about 20 hours, if you approach it the right way. Finally, in a world of 7 billion, not everyone has to like you.

@gray.music.uk on Insta or Facebook, or YouTube.com/c/graymusichub for loads more! x