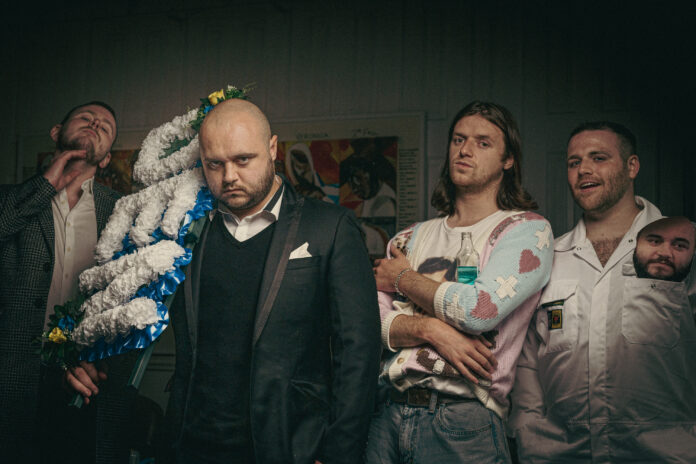 Dirty Den’s March of Suffering, the second EP  from The Battery Farm is released on all platforms including vinyl on Blindside Records 15th October. We caught up with Manchester’s gutter punk front man Ben Corry before they take to the stage for the EP launch at Gulliver’s.

What have you achieved since we last had you in Northern Revive?
We released our debut EP ENDLESS UNSTOPPABLE PAIN last year amid the nadir of the winter lockdown in England. Somehow it was a success and brought us attention we hadn’t had before. It was a watershed moment to be honest, one that kickstarted what has been a steady rise ever since. We recorded and released our 2nd EP Dirty Den’s March of Suffering, which so far has been received glowingly, and we launched it with a headline set to a near-sold out Gullivers in Manchester. Our track Excellent Public Speaker was #2 on Louderthanwar’s Tracks of the Year, we were nominated for a Radio WIGWAM awarda and somehow we’ve managed to stay productive and keep writing and creating throughout this whole mess. So yeah, we’ve achieved a lot I guess!
Any gigs coming up we need to know about?
Shit tonnes! Including some we can’t announce yet but after our EP launch this Friday we’re at R Fest at Retro in Manchester on 13th November, Evil Eye in Liverpool 20th November, 3rd December we’re at The Peer Hat Manchester for Abattoir Blues and then 4th December we play our last gig of the year at Mancunia Festival at Zeros Bar in Stalybridge
Talk us through the new EP
Dirty Den’s March of Suffering is an EP about the moment of death. That sounds mawkish and maudlin but it isn’t. That moment could be all kinds of different things – reflective, mundane, lonely, terrifying, nonsensical, relief, maybe even a split second of joy as your life flashes before your eyes. We’re trying to encapsulate some semblance of all those disparate elements and put them into our voice. This isn’t a definitive word on the final moment or anything that lofty or ridiculous. It’s simply a reflection on the many different, contradictory tenets of the end of a life, something which to all of us is unknowable until it happens. And when it does, it’s unshareable.
What’s movie would you have love to have written the sound track for?
Jurassic Park
Are record labels still important?
They’re important in the sense of someone having your back and helping you out. It’s nice to have that support and to feel wanted. In a commercial sense they’re maybe not massively important anymore. There are plenty of avenues for artists to spotlight and promote themselves that don’t involve a label. Being on a label was always a really important thing to me though, and our label Blindside Records have been a massive help to us behind the scenes.
Who has had the most influence on your music?
Nirvana, Elvis Presley, The Smiths, Witch Fever, IDLES, Evil Blizzard, Bray Wyatt, JG Ballard, Ashton-under-Lyne, Moston, Sleaford Mods, our families, the Internet, Soap Operas, meme culture, Raqib Shaw, Goya, Adrian Street, The Beatles, Manic Street Preachers, some more I can’t think of. It’s a heady cocktail.
Tell us about the release artwork?
The artwork is a drawing I did of the Grim Reaper as a beauty queen wearing a sash that says ‘Miss Walford 2021’. The editing on it was done by Dom and is meant to evoke the feeling of nicotine stained wallpaper from 80s/90s working class terraced houses. The artwork combines the overriding themes and aesthetics of the EP – death, Soap Opera, kitchen sink drama – while also throwing some nonsense in there; I don’t know why the Grim Reaper is a beauty queen. There is no subtext in that, it just made me laugh.
ADVERTISERS

The bands photographer is Trust A Fox  aka Nidge Luhg Sanders. 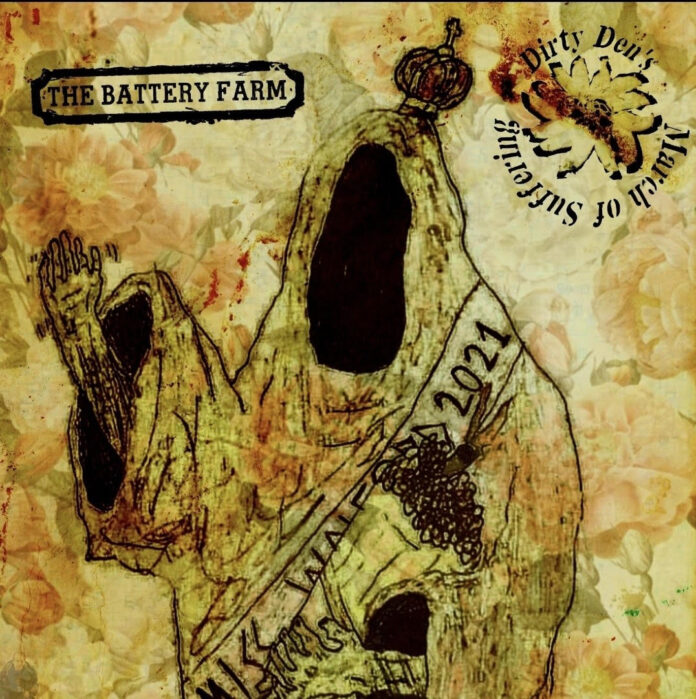 What has been the biggest challenge in your career so far?
Finding the motivation to get out and practice when you’re having a really bad depression day or just generally worn out. Also, getting big support slots, but that’s a problem everyone has and is after solving!
Cassettes, CD, Vinyl, download or stream?
I love all physical platforms because music is a multi-faceted art that is visual as well as aural and you can’t express that properly through streaming. That said, streaming is brilliant for discovery and convenience and I wouldn’t be without it, although you should always supplement your streaming by buying physical product if you can. Obviously as an artist the streaming payment model is criminal and disgusting and needs urgent reform, but that’s another conversation. So yeah, I suppose I don’t have a clear preference. All the above!
What other bands do we need to be checking out right now?
XUP, Chihuahua, The Red Stains, Harpans Kraft, Zand, Slap Rash, Tinfoils, Bones Shake, YNES, The Pagans SOH, Heavy Salad, Gemma Dunleavey, Julia Bardo, VLURE… I’ll stop there cos I could just go on and on
How do you transfer that onstage energy to the studio?
It just comes naturally. I don’t think there’s any other way to replicate that energy for us than to love the songs and to know what you want going in. I’m not a big studio experimenter, I always tend to know what I want while embracing any happy accidents that might occur along the way. We take a completely different approach in the studio. It’s much more deliberate and considered because we’re trying to paint the definitive portrait of the song. So there’s no way, for us, of transferring that energy apart from believing passionately in what we’re doing. If our hearts aren’t in it or we’re not approaching something as a labour of love we’re fucked.
When will you feel like you’ve achieved success
When we put an album out. That’s something I, personally, have been waiting 20 years to do.
Is enough being done to support grass roots music and music venues?
No, and the government can pay lip service to it all they want but ultimately what they’ve done throughout the pandemic is make token gestures with no long-term legislation to protect venues in place going forward. The culture recovery fund isn’t enough, because pre-pandemic the government did not give a fuck about grassroots arts in general and allowed/encouraged local authorities to actively approve and pursue gentrification projects that put venues like Night & Day and The Fleece in Bristol in mortal danger and closed venues like the original Jimmy’s, The Roadhouse and Krobar in London. The government have been doing the bare minimum for decades, as they have been on many fronts. It’s communities that are holding grassroots scenes together.
Where can we find out more?
We’re at @thebatteryfarm on Twitter, Instagram and Facebook. All our merch is on www.thebatteryfarm.com/shop or thebatteryfarm.bandcamp.com
Facebook
Twitter
Pinterest
WhatsApp
Linkedin
ReddIt
Email
Print
Telegram
Previous articleIntroducing Hartlepool Four-Piece Leopard Rays and Their New Single ‘Carried Away’
Next articleIntroducing Spark Houston and his breathtaking new EP ‘Red’