Taken from their acclaimed self-titled debut album, ‘One Hand Tommy’ is its latest single and proves no matter how strange our world seems right now, it could always be stranger…

In a blitz session of blood curdling vocals, disarticulated fretwork and wickelly deranged lyricism, ‘One Hand Tommy’ sees The Imbeciles tell us the tale of: Tommy; a child trapped in a dystopian landscape of nuclear annihilation with only a giant killer snake for company.

Collaborating with Shane Beam, their regular animation partner, this delectably unhinged meeting-of-minds conjures a two-minute sensory riot, in a video cloaked with enigmatic symbolism and allegory. While some may detect religious overtones to Tommy’s epic battle with the snake/serpent, other viewers may decipher a metaphor alluding to the systemic problems facing the world today (societal, technological, ecological, viral). The Imbeciles invite you to make your own mind up…

Shedding further light on Tommy, the song’s eponymous protagonist and star of the video; Butch Dante (the band’s rhythm guitarist), says: “Tommy is an almost mythical figure: An Everyman – or ‘Everychild.’ Vulnerable but brave, he represents innocence and hope in a desperate world.” Northern caught up with The Imbeciles to find out more about…..

Northern Revive: Hello from Northern revive
The Imbeciles: Helloooooooo from The Imbeciles!!!!!
NR: Introduce yourself in less than 10 words…..
TI: Anglo-American four-piece delivering heavy, messy, anarchic punk rock madness.
NR: What made you want to get into music?
TI: Time travel wasn’t an option at the time.
NR: What’s the writing process?
TI: Start with a riff. End with a riff. Spitball in between.
NR: How do you transfer that onstage energy to the studio?
TI: Generally, a lack of rehearsals and inability to grasp music theory takes care of it.
NR: What come first lyrics or music?
TI: Music. But with one of our new songs, Sunday Leaguer, we knew we wanted to write a song about football before we had even started the writing. It was like “let’s do a song about football, and make it sound like the Skids.” It’s fucking brilliant as well.
NR: How did you all meet?
TI: London bound platform, Goole Station, Humberside.
NR: What has been the best gig you’ve ever played and why?
TI: We did a proper punk club in Las Vegas that turned into a riot. There was fighting and they wouldn’t let us off the stage. It was amazing and surprising and just The Best. Time. Ever.

TI:Suspect Device by Stuff Little Fingers. Absolute banger.
NR: What would be on your rider?
TI: Nothing. Don’t believe in that shit. Just let us in and turn on the fucking PA.
NR: What other talents do you have?

TI: Butch: I do boxing. Badly. It’s not really a talent, per se, unless you count the ability to block punches using your face as a talent?  Kip has had roughly the same haircut for the last ten years. He’s really consistent with that shit. Stan’s beard is lustrous, like an otter. Charlie is just really good looking. And young. That’s kind of annoying, actually.
NR: If you could change anything about the industry, what would it be?
TI: Nuclear industry? Well, it should clean itself up, right? Oh, music. Sorry. Well, I wish there was a way for independent bands to reach a national audience on the telly without having to money and lawyer up. In the olden days you had ToTP and The Tube, Old Gray Whistle Test and that. So good. Now it’s just Later with Jools Holland and they have a grim monopoly on the whole thing.
Also, why is music so politically correct and shit right now? We are constantly being told to “clean it up” or that “the BBC won’t play that.” Like, wait, what?! Have you seen the fucking state if the world lately???
NR: If you could collaborate with anyone who would it be?
TI: We’ve covered a Leo Sayer song called One Man Band and we reached out to his manager about collaborating and they were just a huge arsehole. Like, properly cunty. Lik. So we just stuck it on our new EP to annoy them.
NR: What’s the best advice you’ve ever been given?
TI: This is a myth. There is no good advice. Anyone offering you advice is a cunt with ulterior motives and should be killed with a trowel. 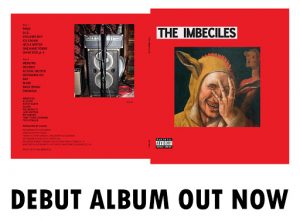 NR: If you could open for any band who would it be?
TI: We are opening for one of my all-time favorite bands next year but I can’t tell you who it is yet. But frankly we are totally gobsmacked that they would even let us in the building.
NR: What other bands do we need to be checking out right now?
TI: Fat Earthers from Isle of White are mental. Just two lads but the guitarist is off his trolley. So good.
NR: What’s in store for you when all this is over?
TI: You mean the virus. Well, I don’t think it’s ever going to be completely over. Where I live in Brooklyn we’ve got virus and riots, and next up, plague o’ locusts, probably. Or another 4 years of Trump. I’d prefer locusts.
NR: How are you coping with lockdown?
TI: Butch: I don’t have any friends and the dog died this year so it doesn’t make a lot of difference honestly. Thanks for checking in on that though.
NR: How is lock down effecting the music scene?
TI: Same scene no live music makes Jack a wanker.
NR: What’s the scene like where you are from?
TI: I grew up in Lewisham in the seventies so it was all punk and ska and violence and racism. It was ok if you like running, screaming and bleeding.
NR: Where can we find out more?
TI: Theimbeciles.com is your best bet for quality merch. And if you don’t want to pay for it register in the database and we will send you things randomly. Seriously. Also, come to a show and walk up to any of us at the merch table and ask nicely and we’ll probably just give you a tee shirt. The price is you have to have a short conversation with us. Some would say it’s better to just give over the money.
NR: Talk us through the video
TI: One Hand Tommy is about the end of the world. We did it before the virus and now it seems quite prescient. It’s about Tommy. He has One Hand. This is all I’ve got.

Later in 2020, The Imbeciles will be returning to the UK for a string of live dates. With no choice but to postpone their planned Spring dates in light of the current pandemic, the band’s rescheduled tour will instead take place between 12-20 November. Details as follows.
THE IMBECILES UK TOUR – NOVEMBER 2020
12 – London, Shacklewell Arms (tickets)
13 – Brighton, Green Door Store (tickets)
14 – Leeds, Royal Park Cellars (tickets)
15 – Birmingham, The Victoria (tickets)
17 – Glasgow, Hug & Pint (tickets)
18 – Tynemouth, Surf Cafe (tickets)
19 – Manchester, The Talleyrand (tickets)
20 – Bristol, The Lanes (tickets)
Tickets on Sale now at: http://www.theimbeciles.com.
All tickets for the original shows remain valid.