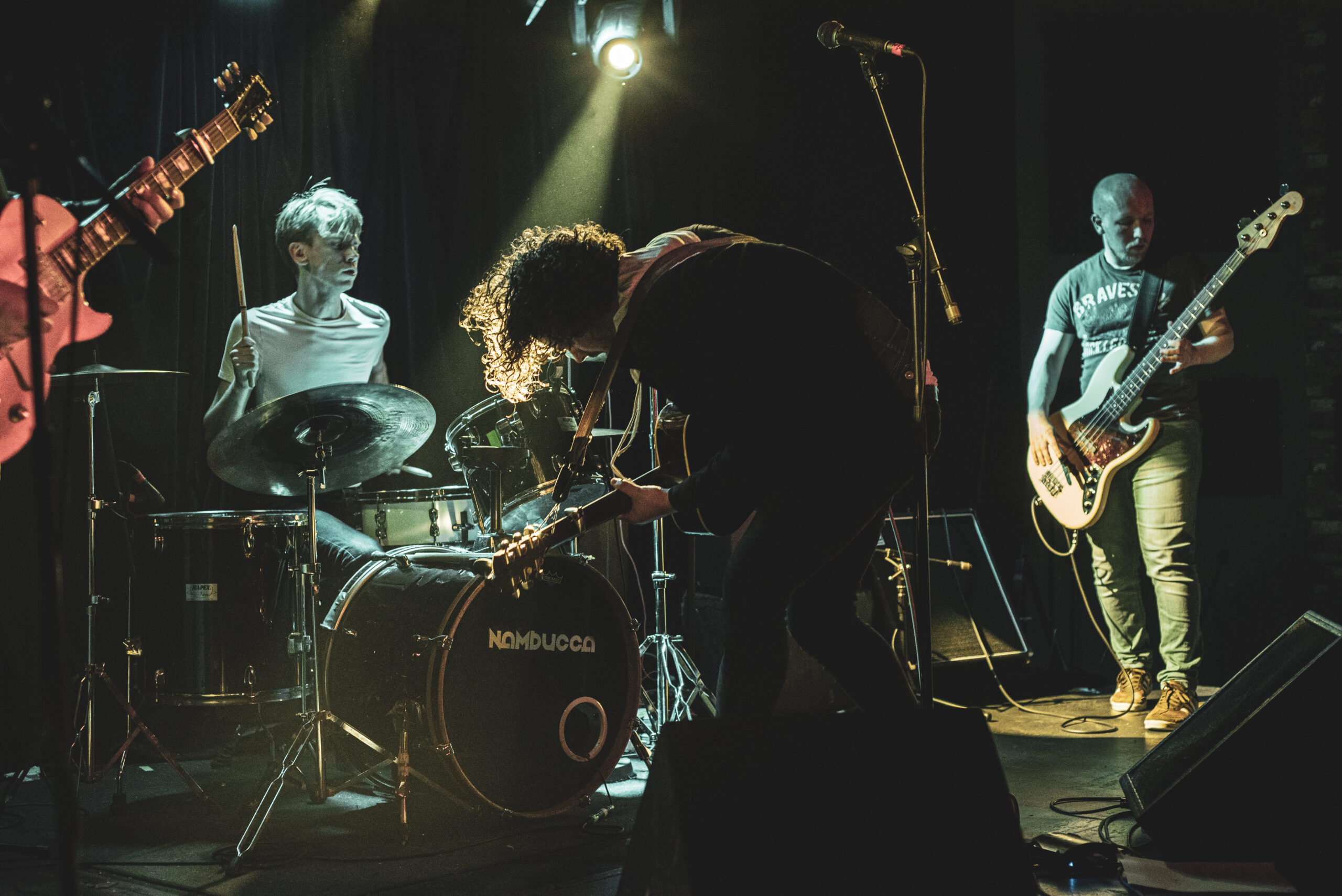 Their reflective and aggressive sound was born during a trip to Amsterdam when four old university friends tried to comprehend the existential haze of their mid-twenties. The band have performed shows across the UK and The Netherlands, including a stage headline set at Long Division Festival and sold out shows in Amsterdam (including a socially distanced unplugged set in the main hall at Paradiso). Their previous single (Millennial Love) is a finalist for Best Rock and Unsigned in the International Songwriting Competition, currently being judged by a panel including Tom Waits, Coldplay and members of Linkin Park. With haunting lyrics that will get under your skin, The New Nostalgia are questioning what it means to be young at heart in the twenty-first century.

Patrick: I think my introduction to music is a pretty common one. My family are big fans of live music so I spent a lot of my childhood at gigs and festivals. When you’re a kid and you see musicians on stage who are clearly deeply in love with their craft it quickly becomes the only thing you want to do. I picked up a guitar when I was around 7 years old and I’ve been performing in some capacity ever since.

Charles: For me it was simply something I felt marginally good at at school, and practice never felt like practice. I had a lot of support from my parents and also being surrounded by musical instruments at home really helped. Finding like-minded friends at school made it a social experience which almost made the process feel effortless.

James: Thanks to my dad there was always a constant soundtrack of music in our household, plus he’d been playing in bands for years, so I was going to gigs from before I’d learnt to walk (first gig: Buddy Guy, me screaming in a pram age 1). But once I’d learnt a few chords I found myself joining his band, absorbing everything I could from the people I got to play gigs with. Although I sometimes wish I had more of a social life with school mates, I was more than happy to be gigging on weekends with people I’d grown up idolising as opposed to trying to fit in at nightclubs with a Hendrix T-shirt.

Patrick: The songs generally start with an acoustic guitar and a pad of paper. I have a background as a solo singer-songwriter and I try to draw on that as much as possible, aiming to write music that can stand on its own when stripped back to the basics of just a guitar and vocal. Once I’m happy with the foundations, I’ll send a recording over to the boys for us to kick about. It’s important for me that we are unified on the lyrical direction of the track so we’ll discuss the meaning and share our takes. Ultimately, we want to create songs that are as specific and personal as possible and that specificity comes from personal experience.

Patrick: We met studying music at university in Liverpool. On our first day, we were randomly assigned groups and that’s how we first got to know each other. Weirdly, it wasn’t until after we finished our studies and had gone our separate ways that we decided to get together as a band. I’m based in The Netherlands and the boys came over to visit for the Kings Day celebrations. It was while we were wandering around the streets of Utrecht that we decided to form a band, if anything, just as an excuse to hang out and see more of each other.

Charles: I spent all three years of university trying to get this band together, so I still find it hilarious that we only got around to it now that we all live in different countries!
What was the last track you played on Spotify?

Patrick: For me it’s “Don’t Be Scared” by Sorry from their recent EP “Twixtustwain”. Basically a perfect record and it’s great to listen to bands who are so clear on their stylistic direction. Charles: I’ve been listening to a lot of Slowdive recently, so mine is “Slomo” off their self-titled 2017 album. I’ve only just properly discovered them, so it’s on repeat at the moment.

James: “Family Van” by Cleopatrick, it’s the latest single off their album that’ll be out in June. One of the few positives of using Spotify is that you randomly discovered bands like these guys, so I can’t wait to hear the rest of the album!
If you could change anything about the industry, what would it be?

Patrick: Greater creative diversity on bills generally. I think quite often in the UK, the live scene can get bogged down when it comes to booking lineups of the same genre. You often end up in a situation where every band is basically playing the exact same brand of music and it can be difficult for people who are trying to do something different to find an outlet. It also makes it basically impossible for anyone who isn’t a straight white guy to find a platform on the circuit. One of the really refreshing things about the music scene in The Netherlands is that you’ll often end up playing a show with artists that are completely
different to you. By doing this, you also open the door to artists from different backgrounds and expose audiences to musicians that they would otherwise never see.

Patrick: My answer to this question will always be Viagra Boys. They are probably the best band on the circuit at the moment and to be honest, I just want to be able to watch their show every night.

Charles: I think we would be a great opener for The Amazons, we have similar vibes I think. Also, like Patrick said, I’d get to watch their set every night.

James: Foo Fighters. To be honest I’d just love to have beers with Dave Grohl and see how long I could keep my composure before re-enacting that Alice Cooper scene in Wayne’s World.

Patrick: How long do you have! At the minute, my go-to’s are Yard Act, Courting, For Those I Love, Squid and Shame. My general rule is if a band has a one word name that starts with an “s” they’re probably going to be pretty good.

Patrick: Gigging and lots of it. I can’t wait to perform again, but to be honest I just want to get back into music venues full-stop. As soon as travel opens up again, I’m getting the first plane back to the UK, giving my family a big hug and then immediately heading to the nearest venue (probably The Lantern in Halifax or The Trades Club in Hebden Bridge). I will literally watch anything at this point!

Charles: I’ve got a lot of tickets booked in for gigs already, so I second what Patrick said. All the planning for our own gigs and getting back into the recording studio later in the year is also getting us pretty hyped.

James: As above: lots of gigs, lots of gigging, lots of hugging.
How is lock down effecting the music scene?

Patrick: Prior to lockdown, I’d be travelling to London for shows basically every month. It’s now been over a year since I was last properly in the city so it’s really hard for me to get a good read on how the scene is holding up. I think it’s really important that we all support each other over the coming months as society starts to re-open. Supporting independent venues and artists is vital, particularly when they have done such a great job of adapting and providing entertainment throughout lockdown.

James: It’s been great to see lots of musicians throwing themselves into streaming gigs, albeit more from necessity than innovation. The intimacy of people playing stripped back and from home/empty venues has made for some incredible performances. But I do hope being deprived of in-person gigs has made everyone more enthusiastic than ever to support live music. 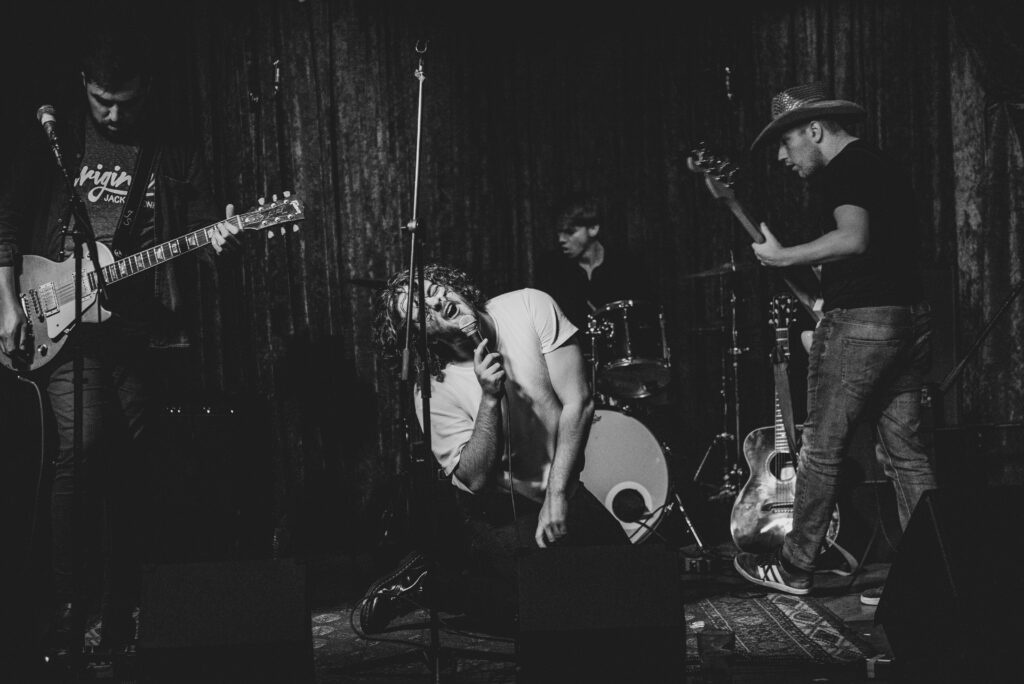 Patrick: It might sound corny, but I really just miss the outlet to express myself loudly. I know a few people who keep diaries or journals as a way of dealing with their anxieties. This is kind of what I do with my songwriting. I get it down on paper and then shout it loudly into a microphone. It’s cathartic and I really miss doing that regularly. I just recorded a live session at a venue in Amsterdam and it was the first time in months that I’d been able to perform in this way. Needless to say, I’ve missed it a lot.

Charles: I think having the opportunity to play music you genuinely love on stage is such a privilege. I (unashamedly) listen to our own songs quite often, so playing a gig and getting to play those songs loudly is a massive buzz.

James: Everything. Loud amps, loud people, extended outros with long solos, messing up some of those solos, sticky floors, overpriced pints in plastic cups. Several months of having a laptop as your band definitely makes you appreciate all the living and breathing musicians that you get to play music with!

Patrick: Bridges is a song that was written collaboratively by Charles and myself. A lot of our songs are about stalling and I think this has resonated with me particularly strongly during lockdown. We recorded it over the summer in Liverpool with producer Tom Roach and I’m very excited to have it out in the world.

Charles: Bridges was written at a time when a lot of my friends were moving on to greener pastures, and whilst you always want to be happy for them you can’t help but feel you’re being left behind. I wanted the song to be upbeat and have this momentous chorus that represented the continued attempt to keep moving forward despite all the pressure and despite all your faults, and in that sense it’s a hopeful, urgent track that keeps returning to that basic premise: keep going.