The Shed Project showing the best of indie Manchester in their new track Bedtime.

Bolton based 5 piece band The Shed Project is made up of Roy on vocals, John on rhythm guitar, Tim on lead guitar, Vince on bass and Karl on drums. This band has taken the 90s Madchester scene, taken out all the best bits and put them together with extra attitude, swagger and coolness. The band’s name comes from where they rehearse and record their tunes, guitarist John’s shed. They say that all the best music starts off in garages, sheds and basements and it’s certainly no different for The Shed Project.

Bedtime was written by Roy about the time he was dealing with his mum being diagnosed with cancer and having 4 months to live and at the same time finding out his brother was a heroin addict. As you can imagine a very testing time for him.That’s why we have teamed up with local Bolton based Mental Health and Addiction organization WhysUp for the track to create awareness on the subject and to turn a negative in Roy’s life into a positive.

Northern Revive had a natter with the lads and this is what they told us:

TSP: Mainly the Madchester scene….. listening to great bands like The Roses, The Mondays, New Fads, Northside Etc back at school in 89/90

TSP: Roy will have the lyrics…..John comes up with a tune on the acoustic, then Roy and John will do an acoustic demo.We will all go in John’s Shed (hence the bands name) Tim (lead) Vince (bass) Karl (drums) then the demo will become a full tune.Tim mixes and masters then hey presto. Amigos no Egos we say.

TSP: 20 years ago it would have been Ecstasy, Cocaine and porn……Now we would be happy with tea, coffee and a few kit kats……

TSP: Roy is the King streaker of Bolton man loves taking his clothes off….John has the biggest balls you’ve ever seen……Tim works for MI5 (we think)….Vince has the biggest record collection you’ve seen and Karl loves to smoke the green stuff……..awesome talents.

TSP: That There should be more opportunities for new bands on Radio X etc……Playing Oasis 20 times a day isn’t good for anyone.There are some amazing unsigned bands out there. 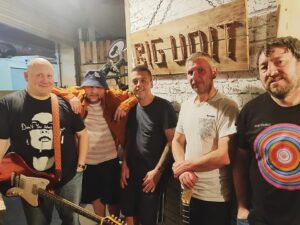 TSP: Ian Brown or The Stone Roses…….. Ian’s the King of Manchester…

TSP: After we Release Bedtime we plan to work on doing an album, all the demos are done so we will work on that to get it out hopefully around April. Hopefully we will get our first gig in when all the dust settles.

TSP: We have just been cracking on with our regular jobs whilst making music when we can, In a way it’s been good for us to get our music out there we released our first single Livin’ back in January and are now releasing our 5th single Bedtime on November 13th so it’s good to share it with the general public and be heard. It’s also given us the chance to rehearse for gigs in the future.