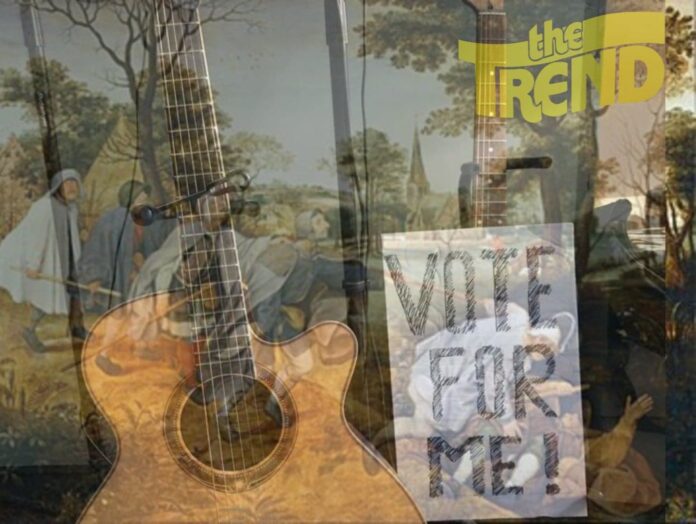 Manchester’s The Trend are back and this time they’re political. After the release of their power pop extravaganza, Bella Vega, at the start of 2020 The trend have not let the momentum slide by releasing a power punk, political look at the world.

Vote For Me is a full power critique of democracy. Combining catchy rock ‘n’ roll riffs, lead singer Rev’s earth shattering vocals and clips from political speeches this track has it all. It is perfect for the current political climate and provides a great social commentary and soundtrack to the US elections.

Let’s hear what they had to say when Northern Revive caught up with them:

Northern revive: What made you want to get into music?

The Trend: Passion, Love, dedication but most importantly the need to write and perform with my fellow musicians. There really is nothing quite like it.

TT: We are very lucky in The Trend in so far as we have 5 very strong
songwriters.

This comes across so well on our latest album Bella Vega which has everything one could wish for on an album from 3 minute ace, quirky Pop Songs to the grand finale on the album Don’t Throw It Away which is a 7 and a half minute epic of a track.

TT: We have our own 24 track studio where we record every single idea which could be just a riff we are jamming out.We then develop that into a working idea which we then record as a live backing track which is where the serious work of overdubbing and arranging instrumentation begins. We don’t use click tracks or auto tune on anything.
What you get is The Trend.

TT: The Trend are a Postpunk Powerpop Band who formed in 1978. After releasing our debut single Teenage Crush which got to number 20 in the independent charts. We signed to
Universal Music on MCA Records.

After numerous singles and tours of the UK the band called it a day. In 2017 a promoter contacted me regarding putting the band together for a one off gig which prompted us to put some music out there.

To date we have released 2 albums and an EP, been featured on 3 compilation albums and our Current single Vote For Me US ELECTION remix is available on all digital platforms.

TT: My favourite track at the moment is the new single by Semisonic You’re Not Alone. 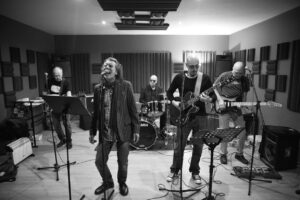 TT: Pan fried Pigeon Breast served on a bed of Puy Lentils with a serving of Mange Tout.
Oh yes and BEER.

TT: Not many people know this about The Trend but our Bassist Steve Scott won the jackpot on Tipping Point. £10,000 and we are still waiting for a pint off him.

TT: It’s not what you play in Pop Music, it’s what you leave out.
A truer word has never been spoken.

TT: The whole of the Arts industry is being decimated as we speak. Actors, Technicians, Directors, Musicians are all being affected by what is going on. As usual we in the industry are being ignored. Appalling.

TT: Our new single Vote For me is politically charged Powerpop Classic which shows all politicians up for the blatant liars they are. Vote For Me US ELECTION remix is available now alongside our latest album Bella Vega on all the usual digital platforms.