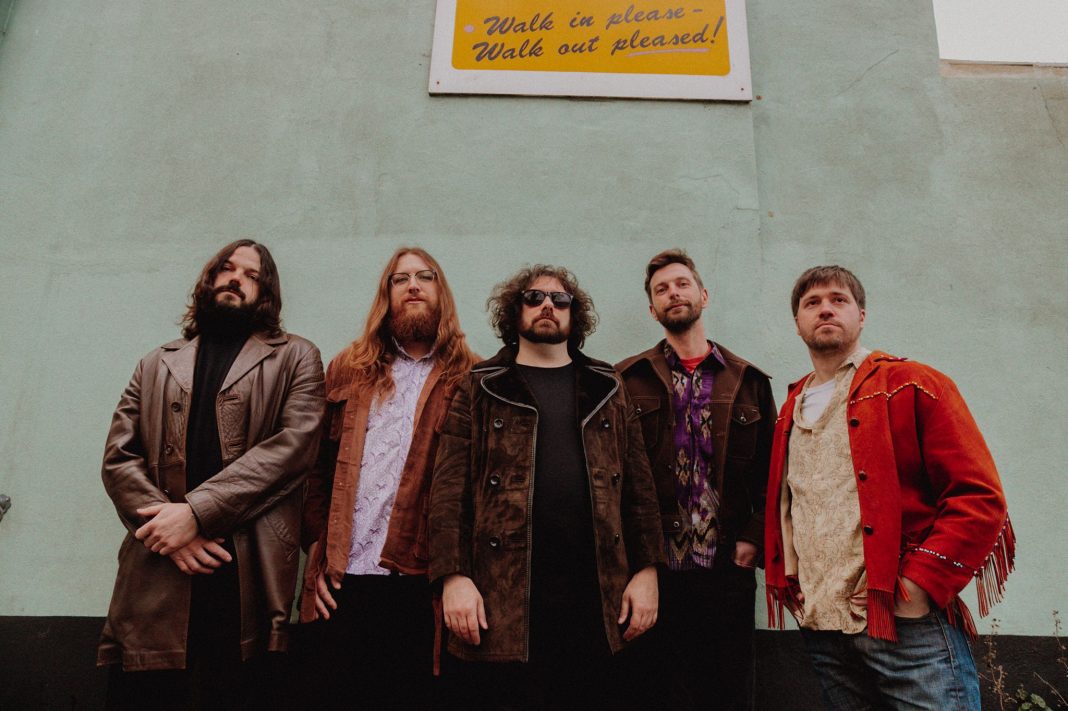 New single Rabbit Hole pays homage to that 90s does 60s sound inspired by songs like Madonna’s Beautiful Stranger, Cornershop Brimful of Asha and Space. Capturing the vibe of a classic 60s song written with some 90s production tricks.

WAXX! Is full of people that have always lived and breathed music; somehow, it’s just in our blood.  Each member has a different band or moment that really made us know we needed to make music, but in general we all grew up somehow defining ourselves through music – the kind of kids with wall-to-wall posters and stacks of music magazines; piles of records and CDs. Nathan always says it was Plug In baby by Muse that made him want to play electric guitar, Henry was besotted by Pink Floyd and Gavin is a diehard Beatles fan so those bands and others would have been the catalyst but for some people it’s just how they’re wired; music just gives them more joy than anything else.

Gavin, Nathan and Henry are the core songwriters in WAXX!, though Gavin tends to write the foundation for the majority of the tracks. We usually send ideas to each other in various stages of completion before they’re fleshed out in a studio session. Luckily the three writing styles complement each other well and it can be exciting to see how much a song or idea changes once it’s gone through that combined creative process.

Ultimately it takes everyone to make that WAXX! sound though; the songs wouldn’t be what they are without everyone playing their part.

As for what they’re about: they tend to be very of the moment; a catharsis for what’s bothering us or a celebration of something good. Music can be an impactful way to carry a message, ask a question or state a belief. WAXX! tends to be more visceral, though, capturing something in the moment.

We bring the party back to the studio and hit record!

It tends to be the music. With so many die-hard rock fans in the band, there’s an emphasis on big guitar riffs so a song often starts with someone writing a cool riff or progression and lyrics come a little later to fit the feel of the song – or Gavin will have a rough verse or chorus lyric idea to expand on. Sometimes we just get Nathan drunk, stick him in the vocal booth and see what happens.

We met in different pockets of the East Anglian scene at different times. Nathan (guitar, vocals) and Paul (Bass)  were playing the same bills in separate bands as far back as 2003. Ryan has played in bands and promoting on the Norwich scene for a long while so he’d crossed paths with Paul and Nathan over the years.

Gavin (Guitar, Vocals) moved his studio from London to Norwich around 2018. The genesis of WAXX! came when he was producing a recording project for Nathan in 2020. Conversations about music led to a jam session, which led to an early iteration of WAXX! being formed. Around the time that was happening, Henry (lead guitar),  moved to Norwich from Guernsey (though doesn’t like to talk about his Guernsey roots) and was looking for a band to jam with. One session in and it was obvious he the new WAXX! Lead guitar player. There were a few line-up changes to the rhythm section whilst the band jammed things out and found their sound, but with 3 guitarists and a keys player locked in, Nathan gave Paul an invite knowing he’d compliment the line-up on bass and having met Joe through recording projects earlier, Gavin brought him in knowing he’d smash it on drums. And so, in early 2022 the final version of WAXX! was formed.

One of the most fun was the C21 Records Christmas blow out. We rented an empty warehouse and put on a massive party. We built a stage, brought in the sound system and engineer, and got a local brewery to sort out a bar. Then got some of the best psych bands on the scene to play and packed the place out. It was a little grimy and freezing cold, but once the party got started no-one cared about any of that . Was great seeing people crowd surfing and jumping around all night – a real testament to the strength of the scene.

Brown M&Ms in a brandy glass; beer, lots of beer; a single large alco-pop (Gavin doesn’t drink beer, says something about fermented bread water being gross); a good bottle of whisky; a couple of buckets of fried chicken and some cheeseless veggie pizza for our vegetarian, lactose intolerant lead guitar player

Henry has been known to set certain parts of his anatomy on fire, not sure that’s a talent but it’s definitely something. Joe is the karaoke king and can nail pretty much any track you give him. Gavin has a trick with a donut……

It feels like the mainstream industry is in an odd place – especially UK radio. There is a very narrow view of what constitutes a “radio” track. It leads to a very repetitive, creatively stifled slew of music being released and because that’s what then sells, the corporate execs assume that’s what people want – so they make more of it. It’s an ever-smaller circle and it would be great to see that cycle broken and some more creative music make its way back into the mainstream. It’s always strange when a producer sits there in a Pink Floyd t-shirt and tells you the guitar solo needs to be shorter, the intro needs to be 10 seconds or less and the track needs to come in at under 2 minutes. But sadly, people learn to conform to these rules as they assume the ultimate goal is to sell that music. It was the guys that took chances that really spoke to people, because they were showcasing something real and it endured because of it. Rock festivals are still being headlined by Metallica, The Stones, AC/DC, Guns&Roses. That shouldn’t have happened. They were meant to be replaced by a new generation of rock stars, but the industry shifted and there is no one to fill their shoes. The big rock festival line ups are starting to look pretty poor! Let’s bring psych and rock back to the masses!

Do you think the government needs to do more to support grass roots venues?

Absolutely. Venues have been criminally neglected for years now. It was hard for them to stay afloat pre Covid, but the way they were treated during lockdown was the final nail in the coffin for many. Obviously, precautions had to be taken, but hospitality and music venues were singled out and given very little help. It’s annoying that music and art is always seen as secondary to other businesses and endeavours. Many people had lots of time on their hands during lock down, so what did they do to fill it? They consumed art! Movies, books, music – all forms of art that need funding and nurturing to survive.

The scene in East Anglia was always great, a real hotbed of interesting bands and great venues. It’s been sad watching it struggle so much over the last few years. That said, there is still so much passion and talent out there that it can ever be fully repressed. People will find a way to do what they love and we’ve seen some great shows again recently. Momentum is picking back up and if the government could offer a little more support to the smaller guys in the industry it could be thriving again in no time.

Danger Mouse might be a cool fit for the band’s production. What he did with The Black Keys: Attack and Release album was stunning

What did you miss most about live gigs?

Playing live is the culmination and validation of all the hard the work. All those hours spent rehearsing and recording. Sometimes it’s possible to lose sight of why we even do it. Then you’re up there on stage, you feel that connection with the crowd, watching everyone jump around and sing your songs back to you. In those moments, we know exactly why we do it.

It’s also available on all the usual streaming platforms and you can follow us for more fuzzed out fun on our socials at: 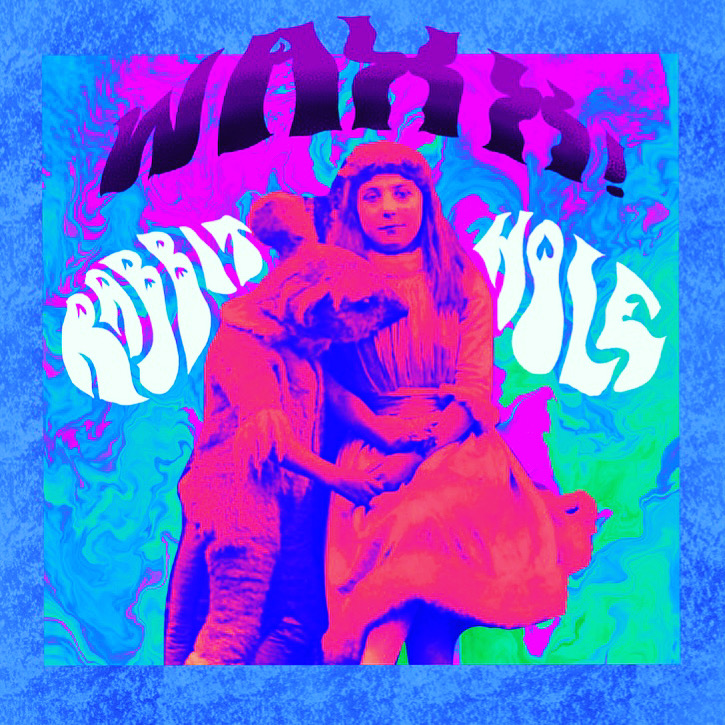